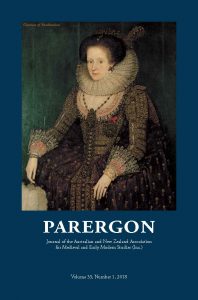 The latest issue of ANZAMEMS’ journal Parergon is now out. This open issue features original research articles ranging across a wide variety of topics, disciplines and time periods, along with a large selection of book reviews. A summary of research articles with abstracts is provided below. Full access is available via Project MUSE, Australian Public Affairs – Full Text, and Humanities Full Text.

Parergon is an international, double-blind peer-reviewed journal that publishes articles and book reviews on all aspects of medieval and early modern literature, history, and culture. We are especially interested in material that crosses traditional disciplinary boundaries and takes new approaches. We welcome submissions from established and early career scholars, and from postgraduate students. For details and submission guidelines, see https://submissions.parergon.org/index.php?journal=parergon&page=index

Historians debate whether the late antique historian Jordanes employed oral traditions in his history of the Goths: the Getica. Close examination of one narrative in the Getica demonstrates that Jordanes almost certainly knew an aetiological folktale related to the modern fairy tale type ‘The Frog King’ (ATU 440). This folktale, however, was not of Gothic origins: it was a native East Roman legend. In context, this lost folktale was a miracle account, not a fairy tale. Jordanes’ legend shares motifs with other pagan, Jewish, and Christian stories from late antiquity, illustrating the common storytelling culture of the period.

The Imperial Character: Alexius I and Ideal Emperorship in Twelfth–Century Byzantium
Elisabeth Rolston

The reign of Alexius I Comnenus (1081–1118) offers an opportunity to explore the ideology of Byzantine emperorship at a time of administrative reform. Two twelfth-century historians, Anna Comnena and John Zonaras, evaluate Alexius’s suitability to occupy the imperial office differently. Anna Comnena’s Alexiad draws on ancient tradition to establish Alexius as an ideal emperor. John Zonaras’s Epitome Historiarum sets different standards for private men and for emperors, finding that Alexius falls short of the imperial standard. Although Anna and John describe Alexius’s character similarly, their disagreement regarding his ability to rule reflects a fundamental difference in their understanding of emperorship.

Frederick II of Sicily made contact with the Kurdish al-Malik Muhammad al-Kamil in 1217—a year before al-Malik became sultan of Egypt. The two rulers communicated regularly over the following twenty years, exchanging letters, books and rare and exotic animals. The focus of this article is the Sulphur-crested or Yellow-crested Cockatoo the sultan sent Frederick. A written description and four sketches of this parrot survive in a mid thirteenth-century manuscript in the Vatican Library. This article reviews these images, revealing that Australasian cockatoos were present in the Middle East in the medieval period and exploring how and why one reached Europe in the mid thirteenth century.

See also the media coverage of this article at The Guardian and BBC.

Simul iustus et peccator: The Theological Significance of Shifts of Perspective in the Middle English Cleanness and Patience
Piotr Spyra

Cleanness and Patience, two biblical paraphrases found in MS Cotton Nero A.x, present a strikingly different image of God, the former revolving around acts of destruction that spring from the deity’s uncontrollable wrath and the latter subverting this by focusing on divine mercy. The juxtaposition of the two poems in the manuscript is here read with the structure of a diptych in mind, which makes it possible to trace the influence of Augustinian thought on the poet. The interplay of Cleanness and Patience is shown to produce a powerful theological statement about man’s relationship with God that brings the poet surprisingly close to a position adopted about a century and a half later by Martin Luther.

Scholarship on the early modern practice of animal trials in Europe has grown substantially in the last few decades. After a critical literature review pointing at the shortcomings of positivist approaches and of the interpretation of the phenomenon as a purely religious practice, I present Foucauldian genealogy as a more rigorous framework for understanding the purpose this peculiar practice may have served. The benefits of adopting a Foucauldian perspective are twofold. First, it allows for a subtle functionalism that does not treat this tradition as a homogeneous block. Second, it gives an opportunity to introduce the animal body into Foucault’s genealogy of power, which rather focuses on the human body and interhuman relationships.

Anne of the Wicked Ways: Perceptions of Anne Boleyn as a Witch in History and in Popular Culture
Roland Hui

In life and in death, Anne Boleyn has always invited controversy. On the one hand, she was that ‘godly lady and queen’ under whom ‘the religion of Christ most happily flourished’. But to her detractors, Anne was the very ‘scandal of Christendom’. A prevailing view that commonly appears in both scholarly and popular texts is that Anne was either perceived in her time as a witch or was indeed a witch. However, this essay argues that such a perception is relatively recent – one created in the earlier part of the twentieth century, sustained by modern writers and historians, and in popular culture. It demonstrates that Anne was never regarded as such by her contemporaries or by those who were critical of her.

Cosmopolitanism and ‘Strange Flesh’ in Antony and Cleopatra
Pompa Banerjee

Two distinct cosmopolitanisms emerge from Antony and Caesar’s consumption of ‘strange flesh’ in Shakespeare’s Antony and Cleopatra. Antony’s cosmopolitanism exposes him to the hospitality and appetite of a voracious stranger who unmoors him from Rome. Estranged from his Roman ‘brother’ Caesar, Antony is linked through the metaphor of strange flesh to Rome’s enemy, Hannibal, who crossed the Alps into Italy. Through Hannibal, Antony unsettles Rome’s ideological certainty but loses his home. In contrast, Caesar substitutes Rome for the world through imperial metonymy. He swallows the world’s ‘strange flesh’. Turning from guest to host, he incorporates the other into the body of Rome.