We asked contributors to the current issue of Parergon to give us some additional insights into their research and the inspirations for their articles. In this post, David C. Harvey, Associate Professor in Critical Heritage Studies at Aarhus University, Denmark, discusses the article he co-wrote with Joanne Parker, Associate Professor of Victorian Literature and Culture at the University of Exeter, UK: ‘Myth, Reality and Revelation: The Performance of Divine Power on Dartmoor’. DOI: 10.1353/pgn.2019.0056

Just a few weeks after I first came to Exeter University as an undergraduate student in October 1988, I remember being taken by Vic Ambler, the Warden of the St Lukes Hall of Residence, for an evening walk to Dartmoor. We got dropped off near Challacombe, and walked via Grimspound, the Headland Warren and Bennett’s Cross to the Warren House Inn. Just before we reached the pub, we walked past the Devil’s Playing Cards; four mysteriously shaped fields laid out on the hillside, in the shape of the four suits of a deck of playing cards. I remember Vic telling a story about how these got their name: that during a Great Storm, the Devil crashed through the roof of the Church at nearby Widecombe-in-the-Moor and carried off a man called Jan Reynolds who was playing cards at the back of the Church. As he flew across the moor, Jan dropped the four aces that he had up his sleeve and they fell to earth as four enclosures. I squinted at the hillside – OK; I could pick out the Diamond quite clearly… perhaps the Heart; but one needed to have a bit more imagination to make out the Club and the Spade. It was a good story – though I would have thought that the Devil would have been happy with someone playing cards at the back of a Church Service?

The walk, across Hameldown, between Widecombe and Warren House is one of my favourites, and the legend about the Devil is a nice story to impress visitors. It might even place me as a ‘local’, or at least as someone who ‘knows’ the Dartmoor landscape. Over the following years, I became more and more familiar with Dartmoor and its legends; lots about the Devil, many about ‘hauntings’, and a good few about environmental hazards – deep bogs or terrible storms. Indeed, there’s a story about a ‘Great Storm’ of 1638, written up on a series of tablets in the Nave of Widecombe Church, in which several people were killed – victims of God’s Judgement. I vaguely realised that the Devilish Legend about the Playing Cards was referring to the same storm event as the tragedy of 1638 in Widecombe, but never really followed up on how and why the two stories were connected.

In the Autumn of 2013, I was to run a 3rd year day field trip to Dartmoor to talk about landscape history and archaeology. The Headland Warren, Bennett’s Cross and the Devil’s Playing Cards was an obvious destination to take a group of third years in the Autumn Term of 2013, and all my Landscape Knowledge or Lore comes into its own when running such a student field trip. The legend of the Devil will be memorable for the students – just as it was for myself in 1988 – and if that helps to instil the ‘factual’ elements of landscape history, then all the better. On Friday 18th October 2013, I led a group of 35 students up to Dartmoor, as part of the Undergraduate Level 3 ‘Geographies of Heritage and Memory’ module within the Geography Department at Exeter. 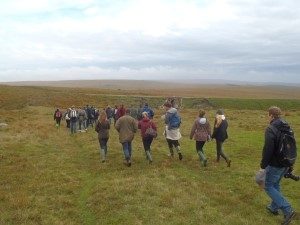 I wrote a blog about this field trip here – and was struck by the juxtaposition of the two stories about the ‘Great Storm’. Of course, the students also asked some tricky questions – surely, they ask me, the Devil should have been happy that people were playing cards in Church(!); and how come the figure of ‘God’ turned directly into the figure of the Devil. These loose ends needed tidying up….

I re-visited the Church at Widecombe and took some photos of the tablets on the wall of the Nave. This story was very clear – that it was God that brought on the Great Storm and God’s Judgement that carried off several parishioners. 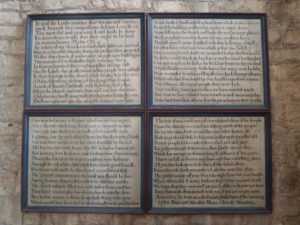 I also began talking to my colleague in the English Department, Joanne Parker, who had previously written about Dartmoor stories and legends. We had been working together within the ‘Past-Place’ research team, at Exeter, and so the idea of producing a ‘life history’ of storytelling associated with an event such as the Great Storm took hold.

Together, we started to patch together the accounts of the Great Storm, of October 1638, from the first pamphlet publications only a couple of weeks after, through renditions in poetic and prose form during the 17th, 18th and 19th centuries, and to their re-deployment in tourist legend in the 19th and 20th centuries. The first accounts of the event appeared in London in November 1638, and in this version, the storm is very much associated with God’s Judgement – though we also found the vestiges of some quasi-scientific reflection and interest. The Devil gets a mention in the 18th century, but only starts to dominate the accounts in the 19th century – which is the point at which the stone enclosures (the Devil’s Playing Cards) near the Warren House Inn enter the scene.

Just as my imagination was captivated in 1988 – and just as I have recounted it to many visitors in the last 30 years – the legend of the Devil has good currency through which to support ‘insider’ credentials. In some ways, its slightly comical and clearly mythical nature provides a gloss of specifically ‘local’ landscape knowledge. It is a story of ‘place making practice’, both over the last 380 years over which the legends have been circulated, and also the 30 years over which I have been telling the stories myself – as a ‘professional landscape historian’. And over the last 6 years, the blog on a WordPress site has now become a published journal article!

All images belong to the author.

Parergon can be accessed via Project MUSE (from Volume 1 (1983)), Australian Public Affairs – Full Text (from 1994), and Humanities Full Text (from 2008). For more information on the current issue and on submitting manuscripts for consideration, please visit https://parergon.org/

This newsletter is edited by Lisa Rolston. Please contact the Editor with any notices to be posted in the Newsletter. ANZAMEMS reserves the right to edit the content of all notices. Unless noted, ANZAMEMS does not endorse any event, product or service advertised in this newsletter.