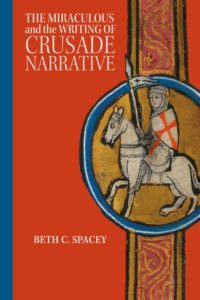 Congratulations to ANZAMEMS member Beth C. Spacey on the publication of her new book, The Miraculous and the Writing of Crusade Narrative (Boydell Press, 2020).

The medieval Latin Christian narratives of the crusades are replete with references to miracles, visions and signs. Mysterious white-clad knights lead crusader armies to victory in battle, Christ and the saints offer guidance in visions, and great signs are seen in the skies. However, despite the frequent appearance of these themes in the sources, and the evident importance of these ideas to the narratives which describe them, scholars have often analysed examples in isolation.

This book represents the first far-reaching examination of the miraculous in crusade narrative, offering an analysis of the role of miracles, marvels, visions, dreams, signs and augury in narratives of the crusades of 1096 to 1204 and produced between c.1099 and c.1250. It argues that the miraculous and its related themes represented a powerful tool for the authors of crusade narrative because of its ability to convey divine agency and will, ideas which were central to the belief held among Latin Christian contemporaries that crusade was divinely inspired and spiritually salvific. Overall, the volume demonstrates how the authors of crusade narrative drew upon various intellectual authorities on the miraculous in the service of their narrative agendas and reveals how the use of the miraculous changed as authors were forced to respond to the challenges of narrating crusade during this period.

ANZAMEMS members wishing to promote their research through the ANZAMEMS newsletter are invited to email the editor, Lisa Rolston.