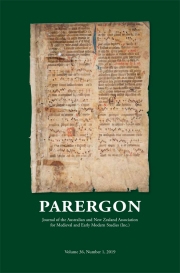 We asked contributors to the current issue of Parergon to give us some additional insights into their research and the inspirations for their articles. In this post, Hwanhee Park, assistant professor at the Department of English Language and Literature at Kyung Hee University, South Korea, talks about “Mealtime Sanctity: the Social and Devotional Functions of Mealtimes in The Book of Margery Kempe” (DOI:10.1353/pgn.2019.0002).

My research focuses on the literature of late medieval England, particularly texts written about or by women that deal with education and self-development. I focus on women negotiating and manipulating their surroundings to aim for greater power and acknowledgement. In that process, I argue, establishing an outwardly visible characters of authority for others to see and accept becomes important — perhaps even more important than the actual interior virtues.

Margery Kempe was well aware of the importance of such visible characters of authority. As a secular woman/mystic who never bothered to remove the slash in between, she was in a tricky position to be acknowledged as a religious authority, either officially or by popular agreement. But she could find ways to make the social norms and expectations of her time — such as mealtimes and their social functions — work for her unconventional circumstances.

My article reassesses the mealtime scenes in The Book of Margery Kempe and argues that mealtimes enable Margery Kempe to claim greater spiritual authority by providing a public space for showcasing her devotion. I got the idea for this article as I was attempting to develop a previous article on Margery Kempe I had written in 2014. In that paper, I argued that Margery Kempe utilizes the ideal womanhood described in conduct books to add to her authority. Since conduct books deal with eating habits and behaviors (to such an extent that a well-known conduct book, Le Ménagier de Paris, has a huge section on meal planning and recipes added to it), I thought that the few but memorable depictions of mealtimes in The Book of Margery Kempe deserved special attention. As I revisited the text, I realized that the mealtimes are important as a stage for performing what her society deemed as good manners. Since medieval mealtimes demonstrate social hierarchy and a sense of community and harmony, Margery could use them as a stage to assert her position within the orthodox circle at a time of religious dissent.

I’m continuing my research on medieval women establishing spiritual authority by making themselves visible to the public eye. My current project goes back to the thirteenth century and to Ancrene Wisse, a guidebook for beginner anchoresses. I argue that the anchoress’s maidservants are essential in making the anchoress an authoritative figure, because of their labour made visible to the local community. This project will expand to a larger one focusing on women’s social labour in medieval England. In that, I hope to return to Margery Kempe and her fascinating career again.

Parergon can be accessed via Project MUSE (from Volume 1 (1983)), Australian Public Affairs – Full Text (from 1994), and Humanities Full Text (from 2008). For more information on the current issue and on submitting manuscripts for consideration, please visit https://parergon.org/